Science indicates that having pets can keep you both mentally and physically healthy, ultimately improving your own life. Thanks to the additional movement that having a pet requires and the strong happy feeling that their company provides; it is observed that most pet owners have lower heart rates and blood pressure when compared to those who don’t.

One such amazing option for a pet is the friendliest Syrian hamster, also popularly known as the Golden hamster or Teddy Bear hamster. These are naturally found in limited areas of Northern Syria, Israel and Southern Turkey, but have also been found in other regions of the Middle East.

Syrian hamsters have an interesting history. Back in 1930, Professor Aharoni captured a female hamster along with her 12 pups in Aleppo, Syria and so, each and every living Syrian hamster is a descendent of these 12 hamster pups. Now, these rodents are popularly adopted as domestic pets worldwide.

The lifespan of Syrian Hamsters

Syrian or Golden hamsters are very active, but also solitary by nature. Even though they are raised as a part of a litter, they do not tolerate the company of another one once they reach the age of 5 to 10 weeks. Because of this, it is extremely important that you cage them singly; otherwise, adult males start fighting if caged together and could even kill one another.

Apart from being solitary, these tiny creatures are also nocturnal and prefer being most active during the night, usually running in an exercise wheel. They sleep most of the day time and wake up at the time of the early evening.

However, even with an active nature, Golden hamsters have a relatively short lifespan, that is averagely 2 to 3 years, even shorter if it grows up in the wild. The oldest Syrian hamster alive on record was around 6 and a half years old. In any case, many factors affect the lifespan of the hamster, such as quality of the care provided, genetics, diet, nutrition, exercise, etc.

Therefore, it won’t be wrong to say that if the pet hamster is well taken care of, the chances of it living longer than usual increases. 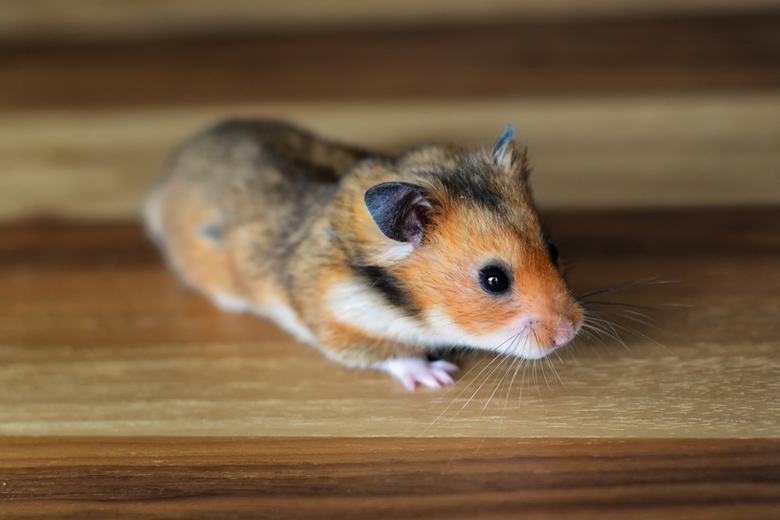 Golden hamsters are very small in size, averaging 4” to 6” with females being larger and heavier than the male ones. They are identified by a very short tail, large cheek pouches, small eyes and a variety of suitable fur colours. Their feet are hairless with four toes on their front feet and five toes on their back feet.

When fully grown, they weigh around 120 to 125 grams and have a stout, stocky body and small fur covered ears with short legs and wide feet. They have large round eyes and small ears. These hamsters are called Golden hamsters because of their natural brown colour.

The Syrian hamsters are capable of using their cheeks for storing food. They are naturally friendly and very easy to tame, making them an excellent pet choice for all age groups, particularly for children.

These are also the largest hamster species and are relatively slow movers, which makes them a little easier to handle. Apart from that, they urinate and defecate less and don’t even bite, because of which it is easy to take care of them and they are an extremely good pet choice.

However, you may face trouble keeping a female Golden as a pet since they come into season every 4 days and during those days they tend to smell strong, releasing quite an unpleasant odour. Therefore, if you have one, it is recommended to move your female Golden to a well-ventilated place to reduce the smell, but keep in mind to avoid drafts and maintain a warm temperature.

How to Take Care of Your Syrian Hamster? 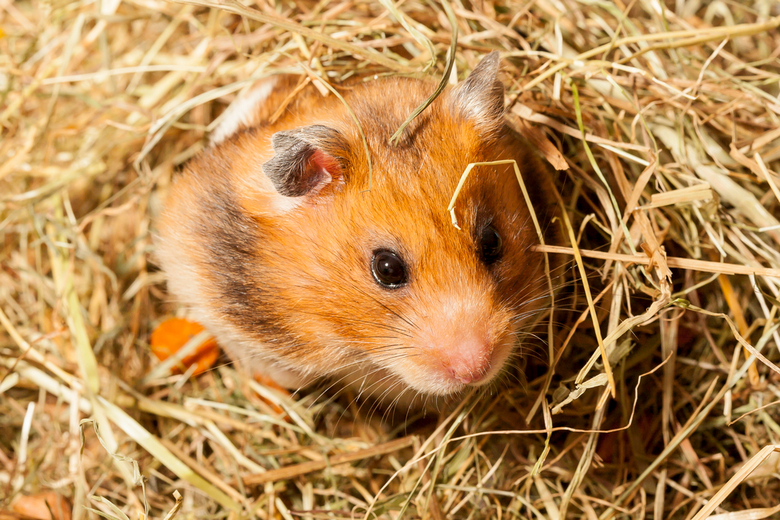 It is not very difficult to take care of a Syrian hamster. Instead, it is relatively easy to take care of it, considering their friendly and docile character. There should be no excuses not to take care of your hamster as they are easy to look after and can be tamed easily with daily handling.

Even though they are solitary in nature, they don't usually bite their human owners and become rather friendly. However, if proper care and time are not given, they tend to become unhappy. To avoid such cases, make sure to give it a lot of toys to play with and spend some quality time every day. Some of the good low-cost hamster toys include cardboard boxes, toilet roll tubes, and cereal boxes.

It is very rare for a hamster to bite its owner and they react quite well to daily handling and care. However, it is not recommended to wake your sleeping hamster as it can startle them creating a negative response towards you.

Also, hamsters are relatively clean animals and use the farthest corner from their sleeping nest in the cage to urinate and defecate. Therefore, cleaning the whole cage frequently is not necessary, just once in two or three weeks should do it.

What to Feed Your Hamster? 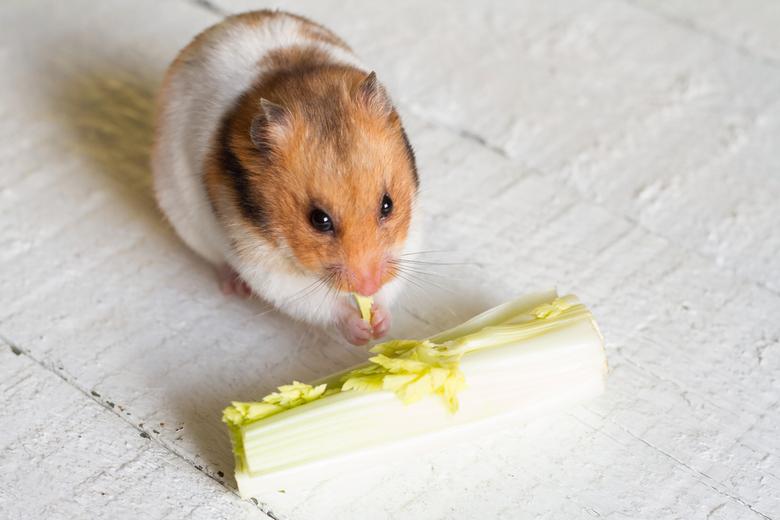 It is recommended to base their diets on a ‘high-quality commercial hamster mix' food. There are many good hamster mix brands to choose from and deciding the most suitable brand for your pet hamster could prove to be a very difficult task.

Any good hamster mix of food should contain the right combination of seeds, grains, and nuts. The nutritional balance of the mix should be comprised of roughly 12% to 15% protein and 3% to 6% fat. In the case of pregnant hamsters, extra protein and fat should be provided, especially when they are expecting birth or nursing their young ones.

Fresh fruits and vegetables can be used to provide supplements. You can feed them the likes of Apples, Broccoli, Cabbage or Carrots. Also, make sure to avoid giving any type of citrus fruits as they are too acidic in nature.

Moreover, remember not to feed your pet hamster fresh food every day as they have the habit of hoarding food in their nests. If excess fruits and vegetables are provided, it can increase the chances of having an upset stomach and diarrhoea. Be sure to wash any fresh fruit and vegetables to remove any harmful pesticides present and also keep in mind to remove any uneaten fresh food before it gets spoiled.

If you are wanting to own a hamster as a pet, you ought to know about their capability to use their cheek pouches for storing and passing food. Since it is a natural habit of every hamster to carry food into their burrows, hamster owners usually make a mistake in the quantity of food intake as they do not take into account the food which has been hidden away.

It is a known fact that hamsters like treats. Hence, to give them an additional protein diet, you can use treats weekly once or bi-weekly. Every hamster love treats and feeding treats can greatly improve your relationship with it as well. However, one should strongly refrain from overfeeding those treats as they can prove to be unhealthy when provided in large quantities.

Some of the best examples of healthy treats for your pet Syrian hamster include hardboiled egg whites, cottage cheese, small amounts of Timothy hay, sunflower seeds, and peanuts, which should be given in small amounts as they are very rich in fat.

In truth, these are not different species of hamsters, but instead fancy names given by the hamster breeders matching to their pet’s colourations or patterns. With regular use, these names became widely popular and are now used all over the world. For instance, the Black Bear hamster is just another name for Syrian hamsters which have black fur.

Currently, as a result of modern breeding, there exists many varieties of coats, in which Syrian hamsters are available. However, the first ever breed of hamsters discovered had short hair. Since then, breeders have successfully managed to breed mainly four types of hamster coats, which are Shorthaired, Longhaired, Satin and Rex. 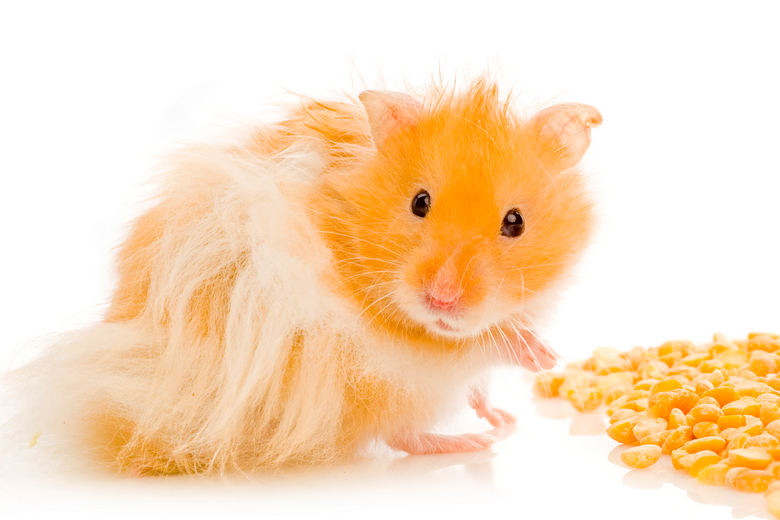 Shorthaired hamsters are our naturally breeding hamsters, while Longhaired hamsters are what are popularly known as Teddy Bear hamsters. In this breed, only white hamsters can grow long hair, usually up to 3 to 4 inches long, while the female has a complete fluffy look.

Longhaired hamsters require extra care as their long hairs attract a lot of unwanted dust and become tangled easily. To maintain it well, pet owners can gently groom their long hair with a toothbrush or a flea comb. 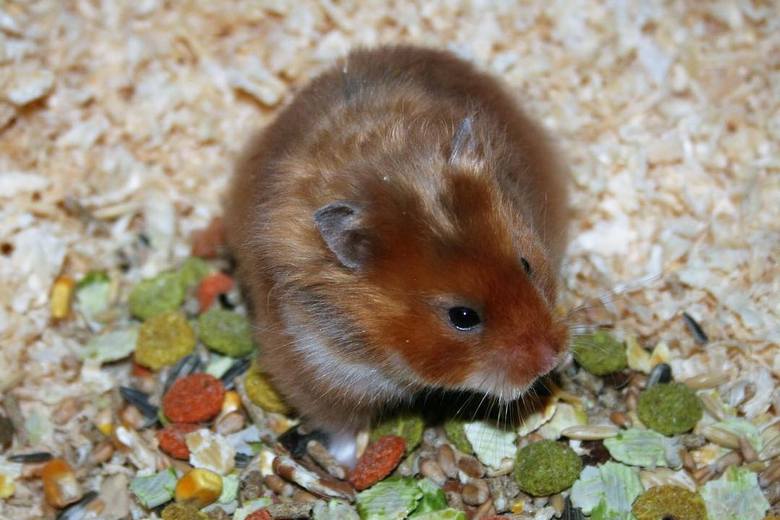 These are a beautiful breed of Syrian hamsters with a glossy effect to their coats. For these breeds, some of the fur shafts are hollowed out giving them an extra shiny look. However, it is not recommended to breed together two Satin hamsters as the offspring may have greasy thin fur, which is not a particularly favourable result. 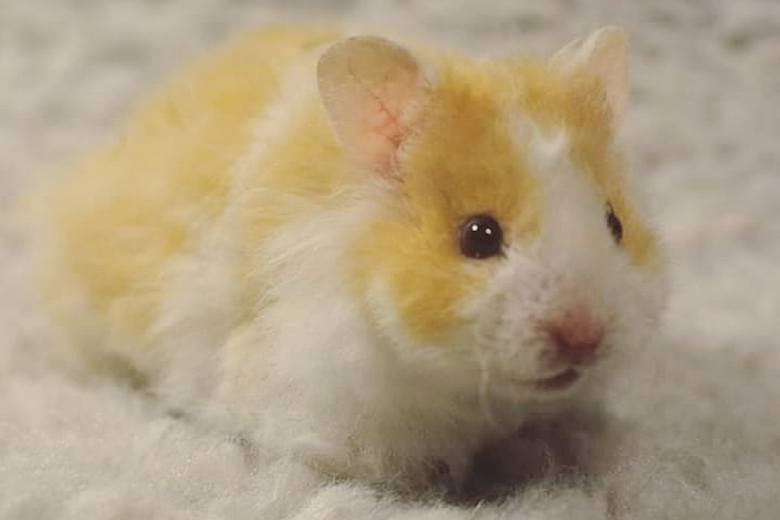 This breed of Syrian hamsters is relatively new to North America but has been very common in Europe for a long time. They are well known for their curly and wavy coat characteristics, which are typically very short and dense.

Fancy breeding has without a doubt developed many varieties of Syrian hamsters based on their coats, colours and patterns. They are available in a wide range of different colours like grey, black, yellow, white, beige, cream, sable, red and even with a mixture of many different colours.

Apart from various colours and coating varieties, Syrian hamsters are also bred in many common patterns such as Banded, Dominant Spot, Piebald, Tortoiseshell and White, and Roan. All of these are briefly explained below. 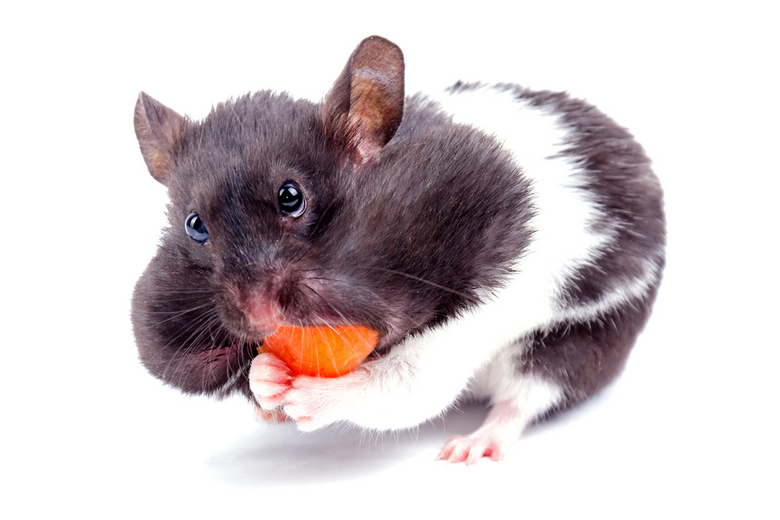 Banded hamsters are one of the very common patterned hamsters and can be easily found at pet stores and from breeders. These typically have a band of white or any other colour variation band around their mid-section of the body. The size and width of the band are variable. 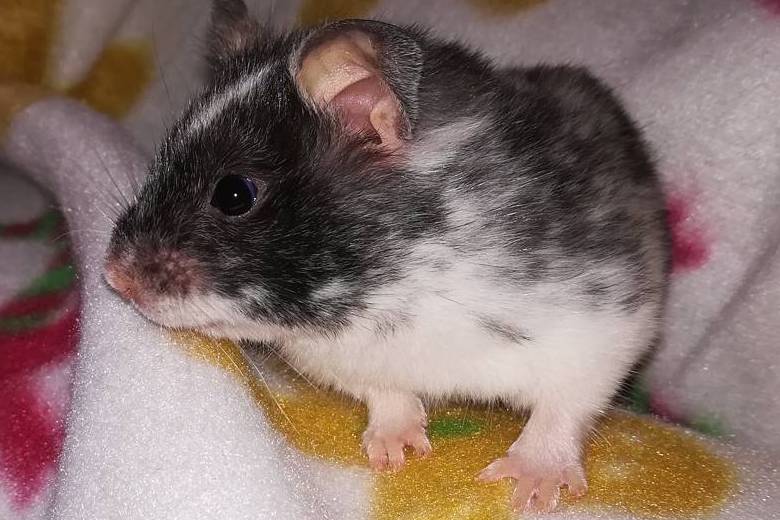 This hamster breed was first discovered in 1964 in the USA and quickly became popular as it was very easy to breed. In most regions of the USA and UK, this breed is commonly described as White Hamster with Coloured Spots. 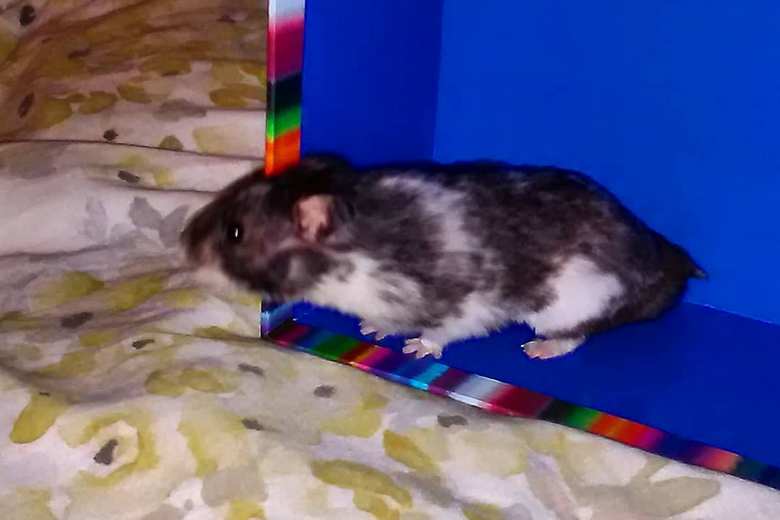 This is another common pattern in which Syrian hamsters are available. This breed comes with a coloured coat having dotted with white spots all over the body. The density of the white spots is variable and can be very small or few or can cover the entire body. Sometimes, Piebald hamsters are born with a coloured belly as well. In any case, this breed is difficult to breed and is considered to be near to extinction.

This breed of hamsters is primarily two coloured creatures with two shades of colour on their coat. Also, one of these two colours is always yellowish with distinct patches. Moreover, only female species can bear as a tortoiseshell variant as that particular gene is present in females only.

Another variant is Tortoiseshell and White, which is similar to the usual Tortoiseshell variant, with the only difference being a white band and a white belly. Again, only female hamsters contain the genes to be born as this variant. 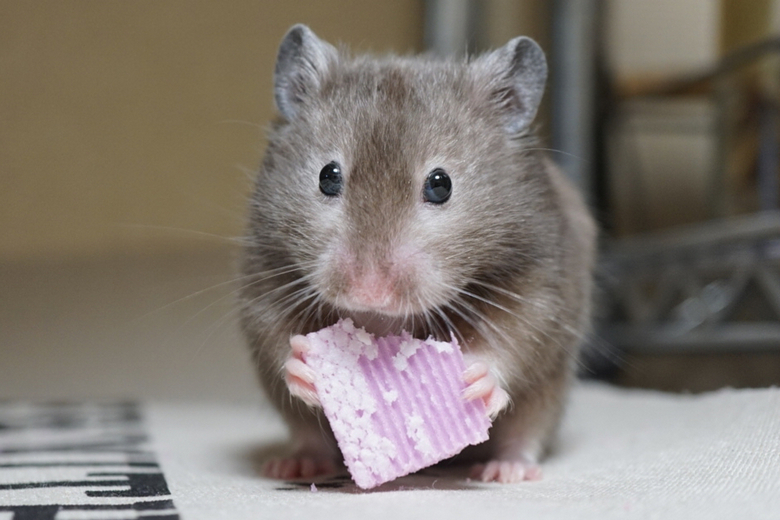 Roan hamsters are just like white hamsters, only that they have variants of colour present around their head, which gradually comes down towards the back. 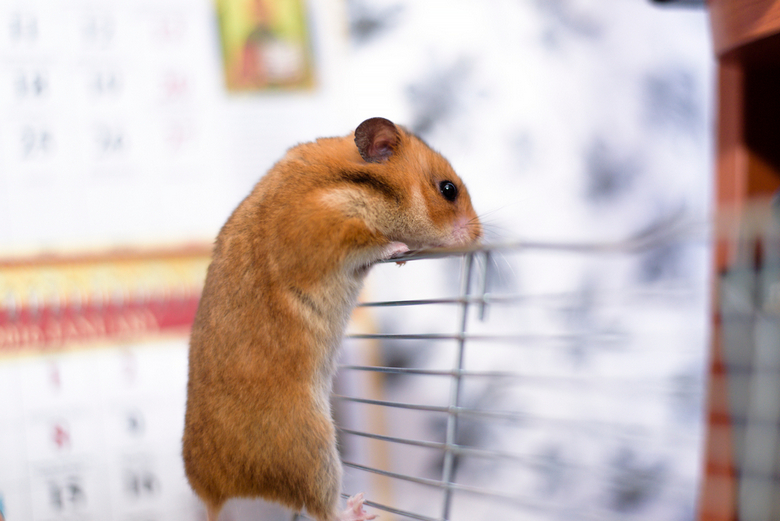 There are a lot of various options available for housing of Syrian hamsters with cages being the most popular and recommended technique. However, having a lot of space is necessary, in fact, the bigger the cage the better. Small and cramped environments can leave a pet hamster chronically stressed, hence, the requirement for a large space comes up; usually around 10,000 square cm of floor space.

Every cage should contain all the necessary items such as a substrate, bedding, an exercise wheel, water bottle, food bowl, chews, treats, and finally toys.