Sandie has pet parented many furry and feathery critters over the years. Currently she has two rescue cats and two, five-year old fantail goldfish. Read more

Scientifically, crows are in the family of “Corvidae,” and are commonly referred to as “Corvids.” Some folks may confuse crows with ravens - probably because both these birds are black - however, ravens are much larger than their crow “cousin” measuring in at 25 inches tall with a four-foot wingspan!

But even though the crow isn’t a raven, keeping one as a pet may not be the best idea. In this post, we’re going to explore the world of the crow and fill you in on why pet crows don’t do well.

Aside from their sleek glossy black feathers, crows are also noted for being a thick-necked bird with long legs, and a heavy, straight bill. They measure in from 15.8 to 20.9 inches tall. They have short tail feathers that can be either rounded or squarish at the end.

When a crow is in flight, the tips of the wings spread slightly being almost finger-like in appearance.

Crows are known for their intelligence and problem-solving skills, earning them the title of “World’s Smartest Bird.” It’s this quality (in part) that makes the crow unsuitable as a pet.

In nature, crows form social bonds with family members and other crows resulting in flocks that can reach numbers into the thousands. These brainy-birds have been known to raid garbage containers in search of a tasty treat, as well as hiding leftover food for later.

The corvid has an aggressive side and will take on bigger birds such as hawks, herons, and owls.

Studies on crows have also shown that these birds will recognize and remember faces. Check out this video on how these crows react to a “stranger.”

Keeping a crow as a pet is detrimental to its mental health because of its high social and intellectual nature. Keeping a corvid in a cage can literally drive it crazy. 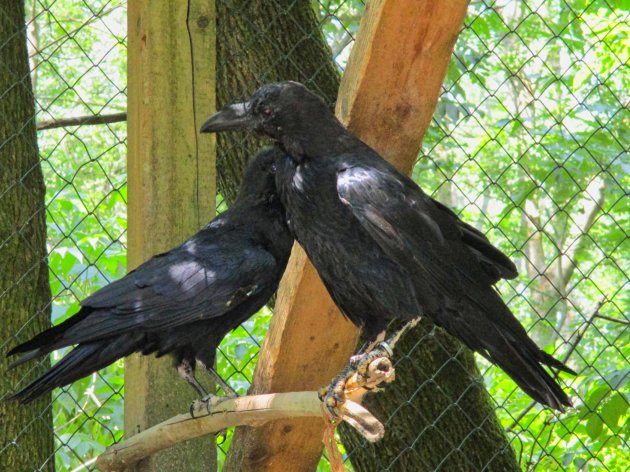 Housing a Crow - Forget the Cage!

If you find yourself caring for a crow, you can forget about a cage. Unlike parrots, (or other captive species), crows do not climb, they hop or fly from location to location, therefore keeping one in a cage will not be beneficial to the bird.

Experts recommend building an outdoor aviary that is big enough for your crow to fly and hop around in. This enclosure will also have to be safe and secure, especially if the crow is injured in any way.

Crows are omnivores and opportunistic feeders (meaning they eat both plants and meat, and whatever they can find). Some people feed crows a diet of dog food; however, they need a varied diet as they would find in the wild.

Crows in nature eat everything from bugs, fruit, seeds, snails, and a variety of human food. Plus, they will also eat roadkill. Feeding a crow a balanced and nutritious diet in captivity can prove to be very challenging.

If you find a baby crow, it’s best to leave it alone and watch to see if the parents are caring for it. If the crow is in immediate danger, it’s okay to pick it up and carefully place it in a nearby tree or bush. Leaving the baby crow in the care of its parents is always the best option.

If you have found an injured crow, gently pick it up and place it into a secure dog kennel or box and transfer it to a qualified animal sanctuary or rehabilitation organization to allow the professionals to take over its care.

Keeping a crow as a pet is illegal in most areas without a special permit. Even if you are trying to rehabilitate an injured or baby crow, it is still against federal regulations. If you are found with a crow in your possession, you can be fined, and the bird will be confiscated. Always call in the experts if you suspect a crow has been injured or abandoned by its parents.

Keeping a crow as a pet is not a good idea. This species is difficult to house because of their need to fly, their highly social nature, and extreme intelligence.

If you have a deep love for the crow species and want to work with them research rescue sites or rehabilitation organizations that will be willing to take you on as a volunteer.

Keeping a crow as a pet is not fair to the bird, and will prove to be a challenge that you may not be prepared for in the long run.