Pros and Cons of Having a Guinea Pig Pet

Guinea pigs are among the less mainstream, but quite popular pets that people like to keep for various reasons. It isn’t difficult to figure out the cause of their popularity, but a list of mainstream pros and cons can be listed about them. Guinea pigs are popular rodents across the globe and are available in almost all parts of the world. Here are some of the prominent advantages and disadvantages if you are planning to get a pet guinea pig.

Pros for having a pet guinea pig

They are adorable: This would probably be the most talked about thing among pet owners who have a guinea pig at their house. They are cute and would actually make the owner feel a lot better to have them by their side.

They live longer: An average guinea pig has a life expectancy of about six to eight years which is a great thing. They can be great companions for young kids and can teach them a sense of responsibility over some time. It is a great thing since they would stay around longer than a mouse or hamster.

Sturdy: It is an established fact that guinea pigs are not subjected to any major diseases and they have a great immune system to keep them safe. They rarely fall sick, which also makes them safe around kids and toddlers.

Affectionate: They are adorable and also greet the owner quite frequently. Guinea pigs also tend to build a relationship with the family in a way that makes them quite the centre of attraction in the house. Everyone would get happy by having it as their pet.

They are gentle: It is also one of their basic characteristics that makes them the best choice to have as a pet. These animals are extremely gentle towards the family and do not cause havoc in most situations. They also tend to fall into routines which would make them an ideal pet for most working-class people.

Taking them around is easy: Guinea pigs are small animals and can move around easily without help. They do need a bigger space to run about for playing and getting exercise. Unlike dogs, they don’t need to be taken out every day. But they can be carried around easily because of their size.

Vegetarian diet: Guinea pigs have a nice vegetarian diet and they can also follow a vegan diet with ease. This makes their waste bin a lot less smelly than that of a cat or a dog. It also becomes much easier to feed them with a vegan diet that would be feasible and would cost less.

They are manageable: Guinea pigs happen to adapt fast and adjust with their surroundings making them an ideal pet for any home.

Attention: Most of the pets require regular attention or their behaviour towards the family changes. However, a guinea pig always remains in the same mood and does not really need much attention from their owner.

Talking about the positives, it really catches the interest of a person who wants to have a pet. However, this also has its negative aspects which are to be listed as well. 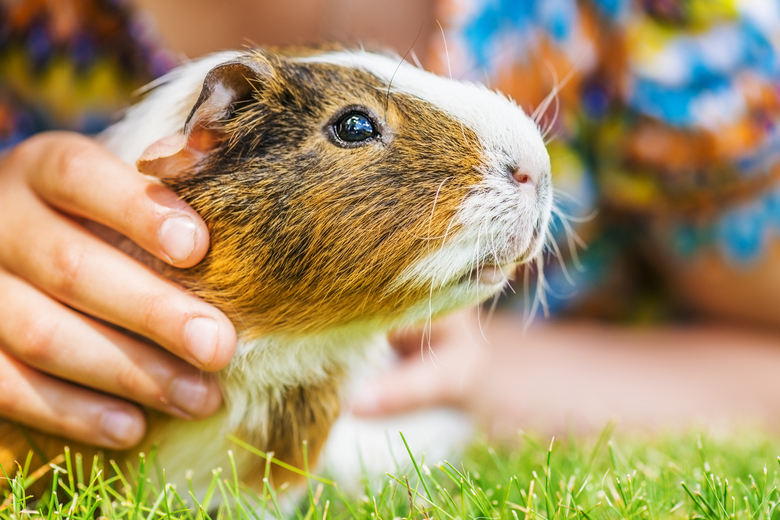 Cons of having a pet guinea pig

Space issues might come up: Guinea pigs tend to prefer staying inside the house rather than going out of it. This is the reason that they want a larger space that would keep them happy. They also run around which needs a bigger space and with time they might get aggressive due to lack of space.

Sensitive creatures: Guinea pigs of all the breeds are sensitive towards mites, worms and a couple other pests. They need to be taken care of properly when any such situation comes up. If they contract certain infections or get bug bites, it can cause some of their fur to fall out.

Homebound: As it was mentioned before, they stay at home mostly and do not step out like dogs or cats. This makes it very complicated for people who go out often to take it out with them. Situations in which the owner goes out of the town would bring the necessity of mobility for the pet.

They can smell bad: This is a common complaint among people who have been owning guinea pigs or even rabbits. The cage when not cleaned up from time to time makes it stinky and unmanageable. It might also happen when a male guinea pig marks his area. This can make them a bad choice to keep as a pet if you have an extra sensitive nose.

Naturally shy: Guinea pigs tend to be shy and do not accept their owner as easily as cats or dogs. This can be a problem for someone who wants to have a pet for therapy purposes.

Noisy at times: They tend to make chirping noises at night which may not allow the person to sleep. If you are one of those people who love the idea of a good night’s sleep, adopting a pet guinea pig could make it harder.

They destroy: These small creatures can destroy a lot of things when they are alone, and it would create a lot of trouble for their owner to clean up the mess every time. You need to make sure that they have proper things available for them to chew on and don’t leave them unattended outside of their cage.

Costs: This is a genuine concern for a lot of people and guinea pigs pass through it initially since their costs are less. But the vet charges, cage, veggies and hay would definitely increase over time.

Odd life expectancy: These creatures become an integral part of the family very quickly and live up to six to eight years which would end up as a sad attachment story.

All the points for both the sides sound logical and views may vary accordingly as well. However, it is your personal choice of having a pet guinea pig and these would not matter most of the time. They have a lot of logical pro points and now you can decide if you would like to have one as a pet with ease.