Bearded dragons are lizards with non-retractable claws. They are called bearded dragons because of their folded skin, with sharp scales under their throat. Its body is also covered with thorns.

What color are bearded dragons?

There are bearded dragons of a wide variety of colors, including brown, gray, green, reddish, and orange.

The bearded dragon can be 16 to 24 inches long. Adult males can weigh 450 g and are larger than females.

Bearded dragons are omnivores, meaning they eat both meat and vegetables. However, their diet must be as varied as possible to avoid malnutrition pathologies.

What can a bearded dragon eat?

Small insects can be offered to them when they are young to later introduce other foods, such as small worms and crickets apart from fruits and vegetables such as cabbage and carrots. At young ages they ingest more protein through insects or small live prey, while adults base their intake on fruits and vegetables, decreasing the protein percentage of their diet. 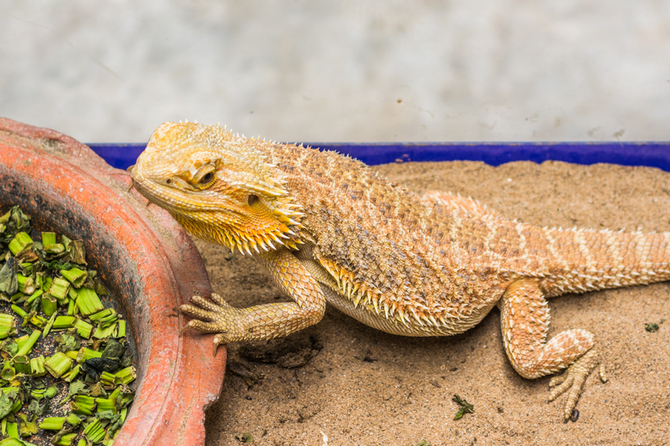 The bearded dragon is a lizard that comes from the deserts and savannas of Australia, so it is not at ease in a well of water all the time. In fact, the humidity in its space does not do the bearded dragon any good.

Do bearded dragons drink any water?

Yes, of course. They should be provided with a small container of clean water at all times for them to drink.

When should I provide water the most to my bearded dragon?

In very high temperatures, summer seasons or when the bearded dragon sheds its skin. It helps to provide a not so deep container of water where it can refresh itself, which also facilitates the skin change.

As diurnal animals, they depend on UV light for the synthesis of vitamin D which enables them to maintain a correct calcium metabolism. You can meet this need with a mercury vapor or fluorescent bulb to provide ultraviolet light. It is advisable to have light and dark periods of 12 hours each.

At what temperature should my bearded dragon tank be?

How can I know if my bearded dragon is comfortable?

One way to know if your lizard is comfortable, is to observe how it responds to the temperature of the environment. When is cold, it flattens its body to receive the heat perpendicularly to its body. When is too warm, it opens its mouth to lose body heat. If the animal spends all the time with its mouth open, then the temperature inside the tank is too high. If the temperature exceeds 43°C for too long, the lizard could even die.

Size: a 20 L tank is good to start for a baby lizard, and upgrade accordingly to its growth. A glass terrarium or tank of at least 40 gallons up to 75 in volume is good for an adult lizard to be happy in.

Habitat: Provide an environment similar to its natural one that satisfies the particular needs of the species. The "ground" of its tank should have deep or hidden "places" to satisfy the bearded dragon’s need for cover. It should also have branches and rocks either to hide in or for basking. This lizard is originally from a desert area, therefore humidity must be below 50%.

A reptile carpet or calcium sand is good for the "ground" of your lizard habitat.

How can I expect my bearded dragon to behave towards me?

It is usually very sociable and nice towards his owners, especially when it has become accustomed to them.

Even though it is a compliant animal, it is also very territorial.

At night time, it goes to a less visible place to rest.

Is it friendly with other bearded dragons?

Bearded dragons have their own hierarchy, so it is not a good idea to place two males together or two different species of lizard in the same tank. They behave fine with the female of the same species. 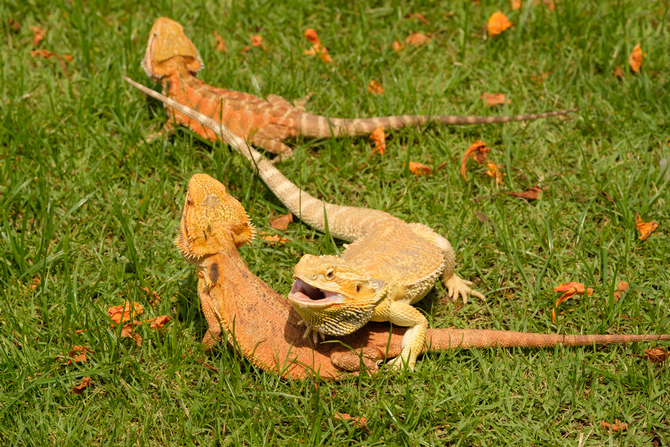 There are immediate signs of illness in your bearded dragon if the lizard:

If you see any of the previous symptoms in your lizard, take it to the vet.

How long does a bearded dragon live?

Abearded dragon can live up to 10 years, but up to 20 years is documented. This can depend on many factors including a proper care from the owners.

Are bearded dragon harmful to humans?

Do bearded dragons have teeth?

Yes. Bearded dragons have teeth that allow them to eat small vertebrates, but they DO NOT bite their owners unless they are not accustomed to them and see them as threats. The way to avoid this is to get the lizard accustomed to your presence, feeding it directly by hand is one way. 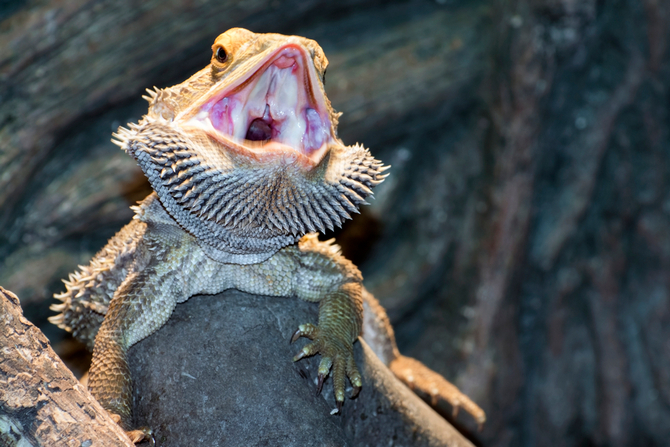 What causes a bearded dragon to bite?

Can you get sick from a bearded dragon bite?

Its bite has bacteria that aren't dangerous to humans. Usually, you can just wash the wound with antibacterial soap. Despite this, it is known that the bearded dragon bite can transmit salmonella bacteria, so you run the risk of having intestinal problems. If you show symptoms, you should see a doctor. If your skin gets split open from the bite, it may be prudent to get a tetanus shot if you have not received one in the last 5 years.

Does their bite hurt?

Reasonably, the bite of a bearded adult dragon hurts more than that of a young one. However, its bite hurts less than the bite of a dog or cat, it can be compared to a scratch.

If you want to buy a bearded dragon as a pet, don't forget to take into account the things and facts you know about this interesting lizard.