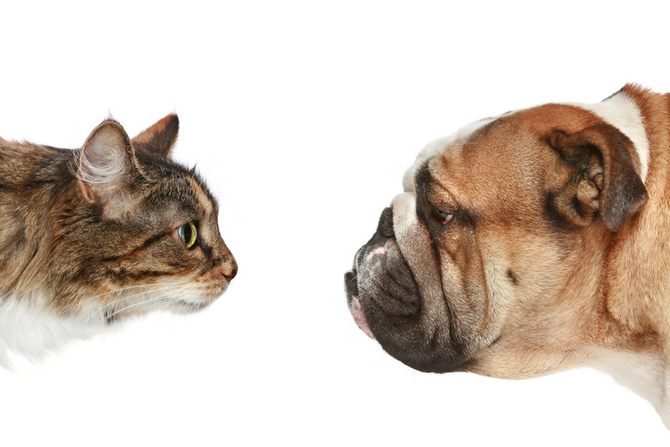 This is especially the case for certain breeds of dogs since they do not get along well with cats. So, for those of you who are interested in the breeds that you should not mingle together, here are some that you must pay close attention to.

Though the smooth fox terrier is rarely used for hunting, they do have a long-standing history of performing these activities. This breed of dogs was used by farmers to drive away foxes and eliminate vermin from places like dens that were formed underground. So, in many cases, the Smooth Fox Terrier can be used for many other situations including being protection for the family since they can make great watch dogs, too. Having said that, if you are looking for a companion or a friend for your cats, this breed of dogs is not the one. Specifically, because they have a high prey drive that makes them an enemy to your cats.

If looks can be deceiving, the Saluki breed will fit this description well. With a fragile and graceful demeanor, you may think that they are all domicile. Unfortunately, this is not true. The Saluki can be described as an enthusiastic and greedy hunter. The tendencies to chase prey over long and difficult terrain is just the start of what this breed of dog can do. Being around cats in a home is not what you want to encourage or allow to occur. Especially because their primary instinct is to aggressively pursue any animal that moves; including your own cats.

The Bluetick Coonhound is known for a number of different things. One of the most notable is how well this breed of dog gets along with children as well as other dogs. Usually, this breed requires a lot of added exercise so they like to stay very active. In some cases, these dogs can begin to require a strong hand when they decide that they want to be a little stubborn. Though there is a lovable side that many people cannot forget, there is an aggressive side that is usually hidden too. The other side is not good for cats because they are also known to be very aggressive hunting dogs that prey on small animals like raccoons and cats.

If you bring a Schipperke into your home, you will probably be glad to know that they are good for being a valuable watchdog for your family. These dogs are good for being a little noisy since they like to know what is going on. In fact, it’s a good idea to take them through an obedience class to dumb down these tendencies. They can be described as being very adaptable to either outdoor living in the country or they can be very comfortable in the city. So, they can be lovable enough for the entire family to pet and enjoy. However, when it comes to adding the Schipperke to a home that already has one or two cats, it is best to reconsider. Because of their overall hunting instincts, they should be brought up in a cat free home.

The Manchester Terrier is a breed that some homeowners love to keep around. Due to their well-mannered demeanor, they tend to become a devoted pet that is good for the family. Especially if members of the family like to take a stroll around the neighborhood for extended periods of time. Some professionals in the pet field may even say that they are safe to be let off their leashes when the dog owner feels it is the appropriate environment. It is also important that to note that they are considered to be an independent, clean but sensitive breed of dogs. However, when it comes to being placed into a cat home, this is out of the question. This is because this breed of dog has been bred to hunt other animals like rats and cats.

Intelligent and strong willed animals is what many dog owners will say about the Standard Schnauzer. Because these pets are very affectionate to children, in particular, the family can usually trust them with their small family members and others who enter the home. While some people may decide to introduce these dogs gently to the cat in their homes, it is important to note that they may be taking a big chance. Since dogs have an inherent nature that is fearless, they do not do well around small animals, even cats. This is especially the case when their prey drive becomes prevalent in their instincts.

If you have a whippet in your home, you can probably attest to the fact that they are usually quiet and quite dignified. In fact, some people will even say that they make the best house dogs that an owner can find. However, if you are considering bringing a cat into the home to reside and mingle together, you should always do your research first. Even though this breed of dog is a medium sized sighthound that appears to be harmless to humans and animals, this is not all of their true nature. Typically, the true nature of this dog is that of a race dog that is good at chasing small furry animals including house cats.

If you are a pet owner who is looking to bring cats and dogs into your home to become a part of your family, you will need to make sure that you are doing your research well in advance. Even though cats and dogs can thrive well in a home together, this is not always the case. Especially if that specific breed of dogs is a hunter of small furry animals like cats.