Finger Monkey as a Pet

A finger monkey belongs to the smallest species of monkeys in the world. A small finger monkey can literally hold onto a human finger like monkeys hold onto trees. These cute little creatures are originally from the South American rainforests. They spend most of their time climbing trees and searching for food. Are you fascinated by this adorable animal? Do you wish to know whether it will be a good idea to keep them as a pet? Below are a few insights on the same that will help you make an informed decision.

The finger monkeys are as active as any other monkey breed. They jump from one tree to another, and they run. But what makes them unique is their capability to rotate their heads 180 degrees without any difficulties. It is not a common trait found in monkeys.

The finger monkeys, being very tiny also have the ability to jump to a height that cannot be easily covered by the other breeds of monkeys. They can easily jump to a height of 15 feet in the air as the weight of the adult monkey would be just 100 grams.

The finger monkeys come under the category of gummivore, who feed mostly on the gum of the trees. They are found mostly on the trees for this reason. Their common habitats are the evergreen forests and the river edge forests where they find their staple diet. They are very active in their natural habitat.

They are the smallest among the monkeys. The length of an adult finger monkey from head to toe would be around 4.6 to 6.0 inches and they weigh about 100 grams. It is this small body structure that earned them different names like the pocket monkey.

The finger monkeys are natives of South America. They are found abundantly in Bolivia, Ecuador, Brazil, and Columbia. They are also moved to other cities like Argentina, Rio de Janeiro, and Buenos Aires to be used as pets.

The finger monkeys usually have grey or brownish or black color on their backs. The underparts of the monkeys are yellow, orange and tawny. Cheeks feature the white flecks. The finger monkeys also have black rings on their tails. There is a vertical line spotted between their eyes.

The finger monkeys have a very different diet compared to the other monkeys. Their staple food includes gum and sap. They choose a diet which comprises of a higher amount of carbohydrates. Plants, insects, and fruits are other items that are part of their diet. The sap and gum are extracted from the tree using their sharp teeth. 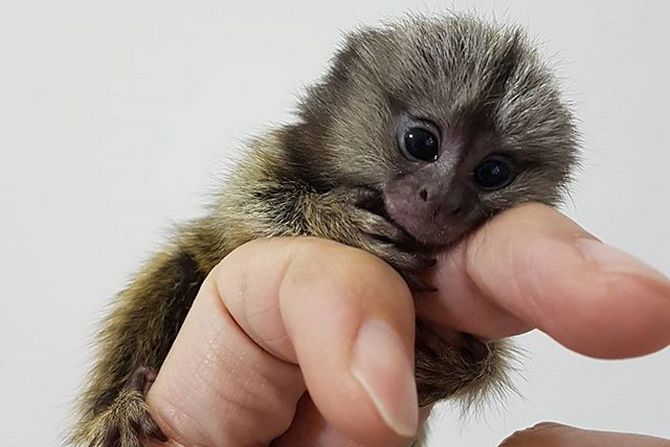 How are Finger Monkeys as Pets?

The trend of keeping exotic animals as pets is growing with time and keeping finger monkeys as pets is becoming more common. However, if you wish to keep them as your pet then there are certain things that you should be looking into. Finger Monkeys can tend to be aggressive when they reach adulthood and you should be prepared to handle them well. They are very active and often need the companionship of human beings or other finger monkeys. As they live in groups of 6 to 9, it is advised to at least adopt 2 finger monkeys together.

How to take care of Finger Monkeys?

The diet of any finger monkey includes biscuits, fruits, Arabic gum and the small things that you usually find in your pantry. But taking care of finger monkeys is far more than simply giving them food and water. You would have to create a certain habitat for them to stay comfortably. You should have a large cage in place wherein they can jump around and move freely. Add swings and tree branches in the cage so that the monkey does not get bored.

When it comes to the diet of finger monkeys, you should ensure that you are including vitamins D3 and C in their diets. These vitamins are indeed essential for their health. You can even buy biscuits that are specifically made for finger monkeys. These can be found at your local shops. Alternatively, you can easily feed them with vegetables, pasta, fresh fruits, rice and small insects.

These creatures also require a lot of sunlight and you should ensure that their cage is placed such that there is plenty of sunlight coming in. An alternative could be to purchase a heat lamp or UV light to include in their habitat. Make sure that you clean their habitats more often so that hygiene is maintained. It is important to note that finger monkeys are also prone to several diseases and viruses just like humans. If you notice any strange behavior or reduced activity and such then you should immediately consult a veterinarian doctor.

How much does a Finger Monkey cost?

Buying a finger monkey can be quite expensive. A small 3-ounce baby costs from $1400 to $4000. Apart from this, you also have to consider the cost of food and habitat which certainly increases the overall cost. If you are planning to buy two finger monkeys, then the budget doubles.

Where to buy Finger Monkeys?

Buying these cute creatures was really difficult in the past. However, these days, with the popularity of people adopting finger monkeys as pets, it has become way easy. You can find them at your local pet store or if not there then online. While buying you should ensure that you are using a reliable and ethical source. It is also a good idea to check whether your country has any laws against having a finger monkey as a pet. Before you even bring them home, you should check if you have a veterinarian who is experienced with this animal. This is absolutely necessary for taking care of him. You are advised to start on the habitat since that would take up considerable time.

How to prepare before you bring the Finger Monkey home?

Before buying the pet, make sure that you are ready for a commitment of 10 to 18 years. You should prepare well before letting the pet in. If you need any license to bring the finger monkey home, then get it way before from the state. You would have to create a habitat for the monkey. Be ready to purchase more than one finger monkey since they need company to not get bored and lethargic. The process of owning this pet might be a little tedious but ultimately you will get a fun and energetic friend that can accompany you. They really are lively to be around, and you would enjoy having them as a pet.

Thus, with the help of the above-mentioned information, you can make your decision on buying a finger monkey. However, you should be willing to take care of them and ensure that they stay healthy.