The age of only having cats and dogs as house pets are over. In fact, there are more options than ever before to bring a furry friend into your home to shower with love and affection as well as have some companionship with. One of the most popular new pets to own are ferrets. Some people swear by them as the greatest pets they have ever owned while others have had less than positive experiences with the animals. There are many important things to consider before making the final decision to purchase a ferret. So what exactly are the pros and cons of owning a ferret?

Pros of Owning a Ferret 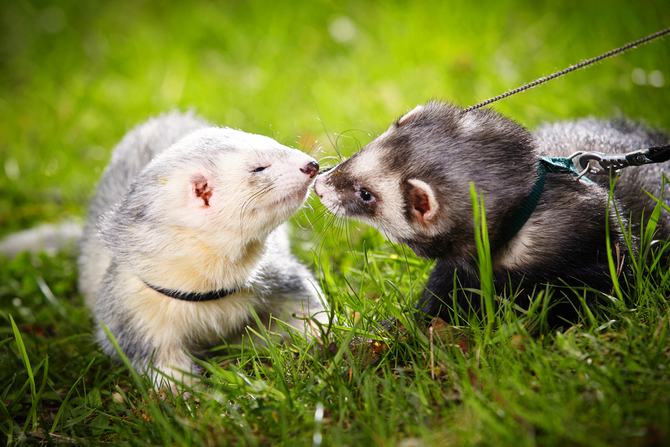 Ferrets have been known as "cuddlers" by those who swear by the animal. When they develop a relationship with their owner, they can quickly become inseparable and will almost always be found by their side. Ferrets are known to frequently crawl inside the baggy clothing of their owners to simply relax and develop a bond in this way over time.

Easy to Care For

Aside from usual baths, a ferret is a relatively low maintenance type of animal. As these animals become more mainstream, pet stores are more frequently carrying specialized ferret food which means you can feed it on a regular schedule just like a dog. The cage of a ferret is small relative to that of a dog and thus cleaning it out is a short job that should take no more than a few minutes.

As was stated earlier, ferrets are extremely smart. Because of this fact, ferrets can be taught "tricks" much like you can teach certain breeds of dogs tricks. They respond to rewards such as treats much like a dog would. Not only can this provide you with endless hours of entertainment, but it can also be a way to amaze your friends when they come to visit.

Cons Of Owning A Ferret 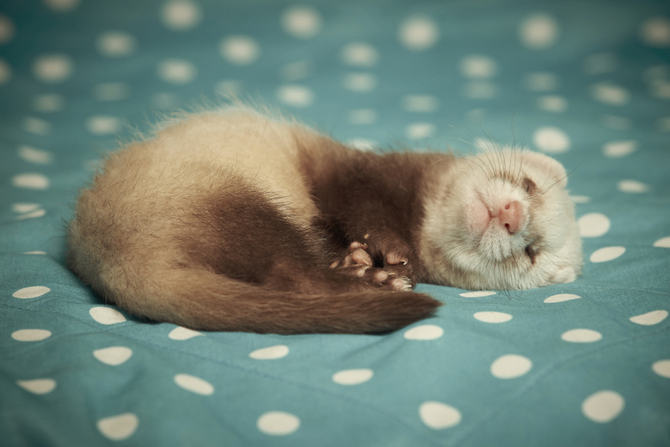 May Not Be Great Around Young Children

Ferrets do not respond well to being handled roughly. In fact, if they feel threatened or in imminent danger, they can lash out against humans. This means that ferrets may not be the best pets if your family has any small children in it. Children tend to be rougher than adults when it comes to animals so keeping a more patient cat or a dog as a pet may be the better option. Of course, there are children who can be gentle with an animal and there are many stories of children falling in love with their pet ferrets and developing an unbreakable bond.

Ferrets are known to be escape artists. Because their bodies are so narrow, they are able to fit through even the smallest cracks in the door or other exit points of a home. Once a ferret escapes a home, it is very hard to find them. They typically will not respond to calls the way a dog might. Because of this, it can quickly begin to feel like a chore to ensure that all doors are always kept closed. This can be especially difficult when you have guests over to the house as they are more than likely not used to having to be so strict with door closures.

Don't Play Well with Other Animals

It is well known that ferrets can get fairly territorial with other species of animals. This means that if you already have some cats or dogs living in your homes, adding a ferret to the mix may not be the best idea. You will quickly find that the two species do not get along and fighting between them can quickly ensue. Of course, if you are willing to live in a home exclusively with ferrets, then this will not be a problem for you and your family.

Can Be Smelly If Not Cared for Regularly

It is recommended that the cage of a ferret be cleaned out at least three times a week. If it isn't cleaned out frequently enough, then the smell can quickly become overwhelming according to some ferret owners. Many also say that the smell of a ferret isn't necessarily bad but is indeed strong and described as musky by others. It is also recommended that when you purchase a ferret, you purchase one that is de-sexed. This will help cut down on the negative smells that some owners have reported in the past.

Owning a ferret creates strong emotions on either side of the debate. Some swear by ferrets as the best pets in the world, while others have nightmarish stories about their experiences with the creature. The way to make a final decision about whether or not to purchase a ferret is to weigh the many pros and cons, and then decide for yourself whether or not it seems like the right fit for you based on your current situation and ability to care for the animal. If you should purchase a ferret and eventually decide it isn't for you, you should always be sure to treat the animal with dignity and respect while trying to find it a new home that is better suited to care for it.