Can Dogs See in the Dark?

Dogs are God sent gifts to mankind. Theories suggest that the human-dog relationship started around the ice age. Since then, these domesticated descendants of wolves continue to live with us as our incomparable companions. They love us unconditionally regardless of who we are or what we do. We can count on the dogs in all of our ups and downs; even in the dark. When I say dark, I really mean it. We can call them even in pitch dark and they will reach us as fast as they can. If you ever wondered, do dogs have any special night vision and how they do this, jump onto this post and unveil all the secrets related to a dog’s vision. 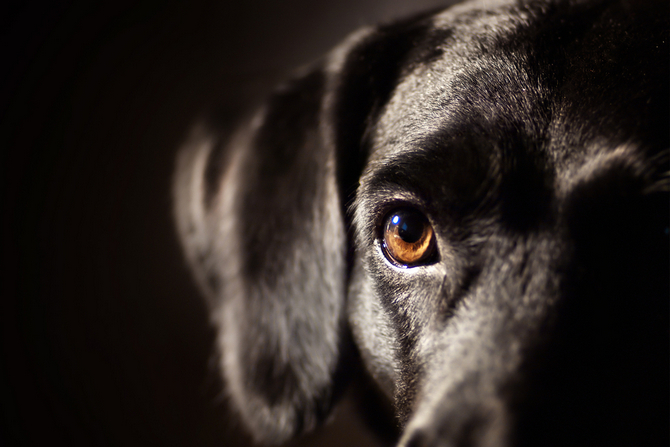 Can Dogs See in the Dark?

Yes, they can. The structure of a dog’s eyes helps them to see well in low light conditions and their memory helps them to easily navigate in the pitch dark. Dogs have larger pupils and wider retinas, which enhance their ability to see in reduced light conditions. In addition to that, they have a mirror-like reflective membrane (reason for glowing eyes) behind the retina which reflects more light into the eyes, further enhancing their night vision.

How Well Can Dogs See in the Dark?

Depending on the type of dog breed and level of darkness, either your dog can see extremely well or just do okay. But definitely, they can see better than we do, particularly in low light conditions. It’s the reason why your dogs can do a better night watch than any human under the street light or moonlight conditions.

But, Can Dogs See in Pitch Black?

Dogs have bigger pupils, wider retinas and a reflective membrane with a higher number of light receptors (rods).Though these all help them to see better in low light conditions, they also have a little problem when they are not familiar with certain places. The vision of a dog does not completely depend on his eyes. His reflexes work faster in a familiar place. Dogs have good vision in the night, but it is not completely perfect. They see like grainy pictures in the dark, just like your old computer screen.

If the place where it’s pitch dark is already familiar to him, he will do perfectly okay and will stay active because it’s already in his memory. Generally, dogs have very deep memory and when it comes to places, he has extra deep memory. I guess this explains how your dog quickly runs to your feet in a single call no matter where he is at the time when the power goes off in your home. He quickly recognizes the structure or layout of the places. Since your house is his only world, every nook and corner of your home will get preserved in his memory in a better way.

Why Do Dogs Bark At Night? Are They Afraid of the Dark?

Sometimes dogs can get really confused in the dark when they see objects of a new shape. If your dog is not familiar with some shapes and they see them in the dark, they will start to bark. Dogs have a higher number of rods (which are light receptors) than the human eye. And because of these high numbers, they help to detect motion better in the dark. Now, putting all these pieces together, your dog can detect even a little rat running around your home when it’s dark, which will make him bark. When talking of strange shapes, a man with an umbrella or man wearing a hat or thick coat may scare him because a lot of these are not things he got used to. In such cases, he will start to bark regardless of which part of the day he sees these visuals.

Dogs barking at strangers carries an entirely different reason and they do this to protect the beloved family to which he belongs.

Are There Colors In Dog’s World?

Do Dogs See Things Only in Black and White?

Ican hear you asking, what colors do dogs see? With the behavioral study of dogs, it is suggested that dogs see the colors of yellow, blue and grey, but in a less bright way. According to Scientist Jay Neitz from the American University, a dog’s eye is different from a human’s eye. We have three “cones” to detect the colors and with that our eyes catch different lights which is why we distinguish between Red, Blue, Green, Yellow or any other colors, but a dog’s eye has just two cones. This means they can distinguish between blue and yellow but not in red and green, and this is the reason they have a limited color spectrum.

Many people think that dogs can only see colors in monochromatic, which is absolutely wrong. A human eye is trichromatic, it means the cones come in three colors - red, green and blue-violet, but when it comes to a dog’s eye, it is only two cones or Dichromatic.

Can Dogs See Better Than Humans ?

Obviously, but only in certain conditions. Dogs do not see the same way as humans. They see five times less light than humans. Dog’s eyes are also helpful for their vision, just like horses, as they also have very good binocular vision which lets them see in a bigger way. The eyes of dogs are placed on the sides of their head and because of this, they have a big visual field with 250 degrees. While human eyes can see in this big version, human eye’s vision field is 190 degrees. With this 250 degree vision dogs have an extra advantage of 60 degrees, which means more peripheral vision than the human eye.

Now the Fun Part, the Reason Why Dogs Eyes Glow in the Dark

As I already said, dog’s eyes got a mirror like structure which is called “Tapetum” behind its retina.Tapetum reflects light into his retina. It’s the reason why when you throw light on them in the dark, their eyes start to glow like cat eyes.

Can Dogs See in the Dark Even When They Get Old?

Dogs can see well when they are adults, but as they grow old their eyesight also gets weaker, just like any other living being. The lens in their eye is something like an onion, it has many layers and as dogs get old their lenses also get old; it is known as Nuclear sclerosis. After 7 years of age in dogs it gets hard for a dog to see perfectly in the dark. As a dog gets older, the density of the lens increases causing cloudy vision for the dog. Just like humans need glasses during their middle age, a dog’s vision is also affected. They can see in the dark but not as they used to, it would be hard for him to run through darkness or to find something in the dark.