11 Fun Facts About the Akita

Lara is an animal lover and a pet writer. A fur-momma of three rambunctious dogs and also a supporting member of The Philippine Animal Welfare Society. Read more

Have you seen the movie, Hachi: A Dog’s Tale? If you have, we are pretty sure you bawled like a baby while watching that movie! Hachi’s story captured the hearts of many and skyrocketed the Akita’s popularity on a global scale. All of this came as no surprise to Osamu Yamaguchi, a veteran breeder who has been raising and supplying the distinctive breed for over 20 years. The Akita is such a charmer, and they are fiercely loyal to their family members. Not to mention they have an irresistibly soft, thick, and fluffy coat that makes you want to hug them forever!

However, there are certain things about the Akita that sparked a debate among dog owners. The Akita is enshrouded with mystery! For one, the Akita’s origins seem murky, especially when you get different answers from your know-it-all local breeder. Whatever question or doubt you have with the Akita, we are pretty sure you will be enlightened with these 11 facts!

The Akita is native to the incredibly scenic Akita Prefecture, which is located in the Tōhoku region of Japan. Hence, its name. Akita is beautifully surrounded by mountains, resulting in showery summers and long unforgiving winters. Even so, Akitas thrive in the bitter cold. That is why they were also known as “snow dogs” back then. Their heavy double coats keep them toasty, while their webbed paws help them walk effortlessly on the snow.

Archaeological excavations also showed that they coexisted among the Matagi since the 16th century. The Matagi are the charismatic winter hunters from the northern highlands of Tōhoku. Together with the Akitas, the Matagi hunt wild boars, and bears. They made a living by selling the meat and the hides of their prey.

The Akita Was the Rich Man's Dog

In the 17th century, only the Imperial family and the ruling nobility were allowed to have Akitas. Back then, Akitas lived lavish lifestyles as their owners observed elaborate ceremonies for them. Some aristocrats even had an entourage of caretakers for their well-pampered pooch.

Akitas were also employed by the nobles as versatile sporting dogs. They hunt falcons, elk, and other large game. Leashes were used to signify the Akita and its owner’s stature on the Japanese social ladder.

Ultimately, Emperor Taisho changed the law so that every Japanese citizen can freely own an Akita. 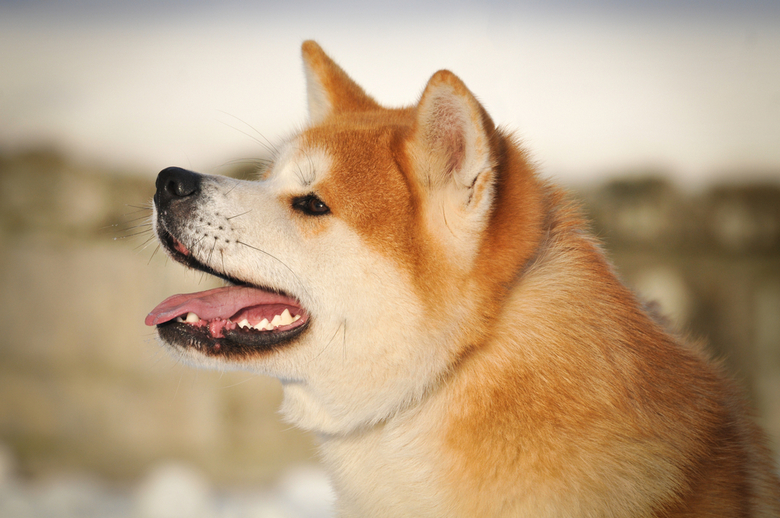 The Akita Was Used in Dog Fighting

Unfortunately, the population boom paved the way for dog fighting in rural areas. Akitas were even crossed with a range of robust breeds including the Tosa Inu in an effort to increase the Akita’s strength and stamina; as well as the English Mastiff in order to create a hulking giant fit for the fighting pit. The crossbreeds were called “shin-Akitas”, which means improved Akitas. Thankfully, dog fighting is now illegal.

The Akita Is One of Japan’s Natural Treasures

Irresponsible breeding and dog fighting led to a rabies epidemic, which almost decimated the breed. In 1920, the mayor of Odate City in the Akita Prefecture commissioned the care and recovery of the Akita. By 1931, the Akita was officially designated among the country’s natural treasures and its name became definitive.

Hachi: A Dog’s Tale Is Based on a True Story

Hachiko's story is celebrated throughout the world. A dog so popular, several movies and children books were made about him! However, Hachiko is not just a character conceived by someone’s imagination.

Eizaburo Ueno, a professor at Tokyo University, had long yearned for a purebred Akita for a long time. Hence, he was thrilled to adopt Hachiko from the Akita Prefecture. They became best friends and Eizaburo loved Hachiko as though he were his son.

Every morning, Hachiko would accompany Eizaburo to the Shibuya Train Station in central Tokyo so he could send him off. He would also come back in the afternoon, exactly when the train was about to enter the station, to pick up Eizaburo from work. Hachiko continued this daily habit but on May 21, 1925, Eizaburo never came back. Sadly, Eizaburo died from a cerebral hemorrhage just two years after Hachiko was born.

The oblivious Hachiko would go to the Shibuya Train Station every morning. He would later show up at the station and wait by the exit for hours. In 1932, news broke out about Hachiko when a major Japanese newspaper featured his story.

Hachiko spent ten years waiting in vain for his beloved owner until he drew his final breath on March 8, 1935… The entire country mourned.

Hachiko struck a chord with the Japanese people, and they made sure he was well-fed while he waited at his post. In 1934, a bronze statue of Hachiko was built just in front of the Shibuya Train Station. Hachiko himself was the main guest in the grand ceremony. You can also find a magnificent mosaic artwork of Hachiko on the wall of the Shibuya Station today, as well as another monument built next to Euzaburo’s tomb in Aoyama Cemetery in Tokyo. Many tourists would flock to these sites. 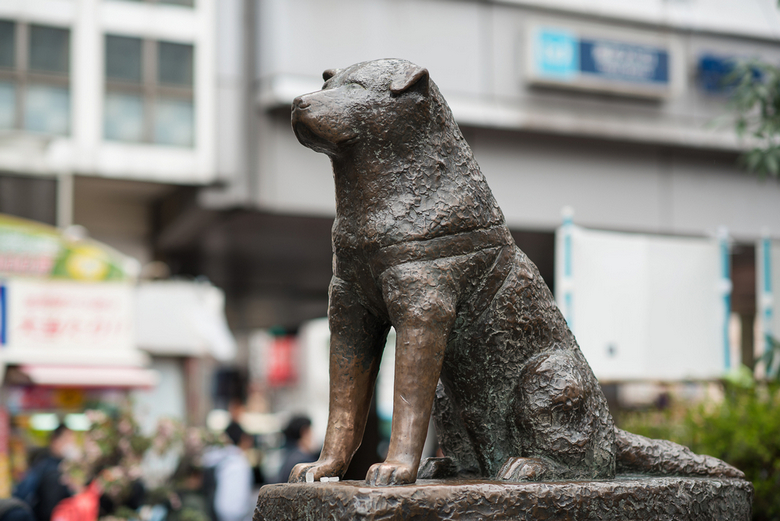 The first Akita who stepped on American soil was named Kamikaze. He was owned by one of the most memorable women in history, Helen Keller. The famous author traveled to Japan in 1937 and was gifted with a six-month-old purebred Akita by Ichiro Ogasawa, a young master of Kendo. Unfortunately, Kamikaze died due to canine distemper one month after Keller’s arrival to the States. Kenzan, Kamikaze’s brother, was then arranged by the government to be sent to Keller. There, he lived with her until the mid-1940s.

Akitas Were on the Brink of Extinction

Japan’s involvement in World War II was another dark period for Japanese dogs. Strict rationing had prevented dog owners from properly caring for their pets. Even Hachiko’s monument was melted down and was used to forge weaponry. (The monument was rebuilt after the war, don’t worry.) Even worse, the government ordered the culling of all non-military dogs. German Shepherds were prioritized since they were employed as watchdogs.

Devoted owners, however, sought ways to save their beloved Akitas. They took their dogs to remote villages, hoping the clutches of war wouldn’t reach them. Fortunately, enough Akitas have survived. Some owners also concealed their Akitas by crossbreeding them with German Shepherds, as well as giving them German-sounding names.

The outstanding efforts of Morie Sawataishi is a major reason why the Akita still exists today. Likewise, the Akita Dog Preservation Society aims to maintain the Akita pedigree despite widespread crossbreeding.

There Are Two Types of Akitas

A dog so impressive, the Akita easily ensnared the hearts of the US servicemen who were stationed in Japan after World War II. However, they were more impressed with the bear-like Akita with subtle features of the German Shepherd and thus, imported many upon their return.

The Akita was later recognized by the American Kennel Club under the Miscellaneous Class in 1955. By the end of 1972, the AKC moved the Akita to the Working Dog Class. The AKC considered the American Akita and the Japanese Akita as two varieties under the same breed and allowed interbreeding. Many would use the term “Akita” interchangeably for both types. 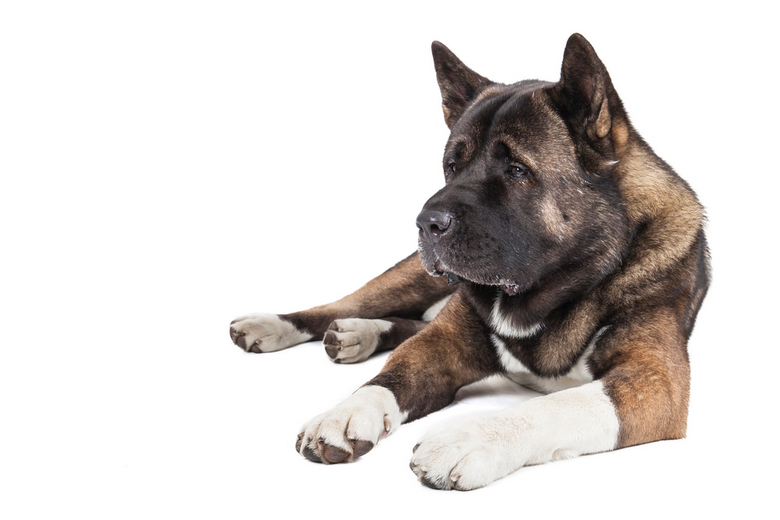 However, Japanese Akita fanciers were not pleased as they focused on restoring and maintaining the pure lineage of the Akita. In 1999, the Federation Cynologique Internationale officially made the split and named the American type as the Great Japanese Dog, which was later renamed as the American Akita in January 2005. 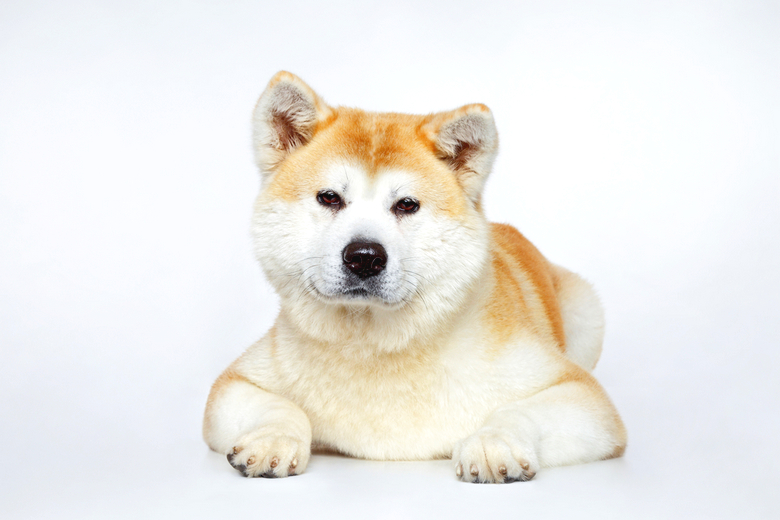 To make it easier for you to distinguish a Japanese Akita from an American Akita, a list of their distinctive features are provided below.

There Is a Museum Dedicated to Akitas

The peaceful city of Odate in the Akita Prefecture is the mecca of Akita lovers. There, you will find a museum dedicated to the Akita. It was built by the Akita Dog Preservation Society in 1967 when they commemorated their 50th founding anniversary. The museum is a treasure trove of photos, documents, and other memorabilia that will satiate your curiosity about the Akita Inu.

The entire world knows how Russian President Vladimir Putin loves dogs! That is why world leaders are giving him puppies. One of them is Yume, a Japanese Akita. Japan gifted the Russian president a Japanese Akita as an act of gratitude for Russia’s aid after the massive earthquake and tsunami that hit Tōhoku in 2011.

By 2016, Yume made a commotion that amused the international media. As expected of a fierce, loyal, and loving Akita, Yume stormed the hall and boisterously barked before the visiting journalists.

Akitas are strong, muscular dogs covered in fluff! Considering their Japanese lineage, these dogs are revered for their stout hearts and incomparable faithfulness. That is why they are a symbol of good health, fortune, and longevity in Japanese culture.

However, you cannot expect your puppy to just grow into another version of Hachiko. You need to provide not only for the needs of your dog but also spend time with your dog. As expected of an intelligent dog, they can be a little stubborn, too. Akitas, in particular, require frequent mental and physical challenges to remain hale and hearty. They have a strong prey drive and are intolerant of other animals. Nevertheless, Akitas will gladly share their goofy side with their loved ones. In fact, these dogs thrive best when they are surrounded by their family members.